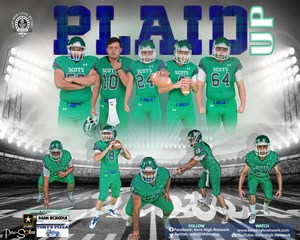 The Scots Improve to 6 - 0! We have a BYE on the 13th and will travel to SOUTH for the 20th!
October 9th, 2017
A big thanks to all of our staff in attendance, the Plaid Zone was packed  Friday night to help celebrate our Homecoming and take in part of history as our varsity Football team defeated Foothill 70-21 and set a school record with 6 consecutive wins to open up a season.  This game puts us at 1-0 in SEYL play (2-0 for the Battle of the East Side trophy).  We have a bye this week before traveling to South High in a match up with SEYL title implications.

Our 2017 Homecoming Queen was Kaitlyn Espinoza and our King was Josh Yubeta.   A special thanks and recognition to all those who put the time and effort to make an event like Homecoming go off so well and make it an enjoyable evening for all.  Starting with MBS and our crew of ASB students who put on a great week of Homecoming celebrations that included decorations, noon time events, Rally’s and all of the intricacies of the evening itself.  Bre Abe and our Cheerleaders did a great job with spirit, new cheer boxes and a halftime show. Geoff Ruud and our Black Watch Brigade also provided their usually pep and halftime entertainment with class.  Our custodial and maintenance crew had the field looking great!  Nice job to the whole group.

In Cross country this Saturday at Woodward Park, Moises Medrano ran a school record 15:23 on the state meet course and finished 11th place in the prestigious  Sweepstakes race (he was the top finisher in the entire section).  This individual race features most of the very best runners in the state and is actually considered tougher than the state meet itself  because the sweepstakes event is not based on team divisional placement.  Haley Ulloa was our top girls finisher in the team race with a time of 20:23 and Peter Wykoff led our boys team race with a time of 17:33.

Have a great week and GO SCOTS!!!

On Friday our JV Football  stared off the weekend with a 49-2 victory over Hoover.  After the game the opposing coach and officials were very complimentary about our boys and coaching staff.  We conducted ourselves with class and composure.  Our Varsity team kept the momentum up on the way to a 51-15 victory. Cade Sakamoto and Matt Miranda started off the scoring on the opening drive with their first of two TD passing connections, Marquie Lewis added two touchdowns on the ground. Once again it was truly a team effort as the offense moved the ball with efficiency and our defense held a very athletic group from Hoover from any momentum.  Our Varsity team is now 5-0 and will begin League play this week vs Foothill.  (Remember the varsity game will start at 7:00)

Our Varsity Tennis team won the D-4 section of the Lewis Cup on Saturday.  This group has been working hard and steadily improving throughout the year.

In Cross Country at the Bell Jeff Invitational, Moises Medrano finished 2nd in the seeded race with the impressive time of 14:38.  This raced featured two of the top runners in the state and was neck in neck to the very end.  Moises closed the small gap at the finish,  but ran out of real estate, and ended up .4 seconds behind.   In the Varsity Boys team race (without Moises) our Boys took first, led by Peter Wykoff and all the varsity boys medaled.  Alexa led our Varsity girls team with a medal finish and our JV boys finished 3rd.

September 25th, 2017
The Highland Varsity Football team had another big game as the Kern High Network was here to broadcast their game of the week.  This week featured a match-up of GV’s much hyped dual threat QB and our swarming defense.  For the second week in a row we started off the scoring with a safety.  This time Nate Jackson blocked a GV punt through the end zone to  give us a 2-0.  Golden Valley answered with a TD and a missed PAT to take the lead 2-6.  We closed the half up 9-6 after a Nick Salas TD reception from Zeke Arambulo and PAT by Leo Robles.
Golden Valley took the lead 12-9 early in the 2nd half on a TD pass of their own.  From then on it was all Scots, as our defense kept up the pressure on their QB and didn’t give him or anyone else space to make plays.  Offensively, DJ Davis scored two consecutive touchdowns, one by reception and the other one rushing (the second of which was set up by a Jahi Hudgins interception).  Marquie Lewis put the final stamp on the victory with a TD run for the 29-12 victory.  Our Varsity Team is now 4-0 and will travel to play Hoover at Sunnyside Stadium this week.
Please join us as we try to go 5-0!
Published September 27, 2017 Print